"The Eye of the Eagle" 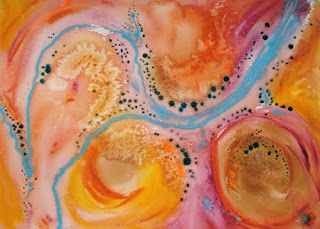 This recent month has seen me hard at work in my studio imagining flying over the deserts of Central Australia as an eagle and then putting this down on paper. I was amazed whilst reading up on eagles and how they see, to learn that they have pentachromatic vision (we have tetrachromatic). Eagles can see ultraviolet and infrared colours - so Wow!

Pondering the complexity of this, I felt that they saw far more brightly than we did and so I pushed a few colours round in Photoshop to see what effects I could get. All this dreaming and fiddling around has led to very colourful exhibition indeed. At first I found it too much but as I settled into it, the paintings burned into my soul and I now feel quite at home with them and their intense colours.

Why eagles and why now? Firstly, recent heatwaves have crossed the country leaving it bare and exposed, dry and parched. Daily reminders of the planet getting hotter, have left me wondering once again about Climate Change; is it real, why does it happen and what does it mean?

I don't have answers to this although I find it extraordinarily fascinating......like most of us I believe.

Australia is the driest and harshest continent on the planet with the most ancient and exposed soils. Millions of years have passed and former mountains have eroded down into floodplains and deserts. These cover over 90 % of Australia. The colours when viewed from a plane, are bright reds, oranges and yellows with tracks and dry river beds crisscrossing the land.

Secondly, I feel, if we could read the land, if we could understand the patterns and their meanings, then just maybe we could learn to live with the earth successfully. We could stop building cities on fertile lands and fields, we could build for temperature and climate changes, we could do things better. It's true we've survived for almost 5 million years but the recent upswing in our skills has hurt the planet more than ever before and now we worry about our own survival as a species for probably the first time ever in our history.

I have painted these paintings from a deep part of myself that yearns for a greener place, a safer place but at the same time is amazed and drawn to the wondrous colours of the earth.

Australia may be the oldest and most exposed place right now, but believe me, it's where other countries are headed over the next few thousands of years as the glaciers dry up and and the mountains erode down to floodplains and deserts. Look at this place, Australia and learn for this is where you are headed. It is not a country that can sustain many more people than it currently does......it is not the lucky country it once was.......and we will need to move whole towns and populations as the heat increases and the desert continues to grow ever larger.

There is no doubt in my mind that human activity here in this 'sacred' place has exacerbated the rate of desertification. The ripping out of whole forests, the ploughing and chemical spraying of large tracks of land, the channeling of water away from floodplains and marshlands continues today despite the warnings written already in our land and able to be seen by the eagles looking for their old hunting grounds.

Try looking at the earth through 'the eye of the eagle'!

The exhibition can be seen at Jayes Gallery in Molong NSW from 5 February to 7 March or online closer to that date.

Summer turns up the heat!

Summer is really here with temperatures soaring inside the studio to over 30 degrees let alone outside.....temps at 35 degrees and higher! Tonight it's still 30 degrees outside at midnight (or nearly!) and bush fires burning in South Australia and Victoria on catastrophe alert!

But all the while, it's raining across the desert and the water is collecting in Lake Eyre. There's floods to the north of here whilst we languish with little water in the town. The amazing thing is, the mines nearby (Cadia Mines) have just announced another extension which will need a further 6 mega litres daily from an already ailing system. Our town doesn't have the luxury of a river nearby but relies totally on local rainfall for the supply. And we are told that the mine is already planning to mechanise the processes so there will be a short burst of employment then back to the same number of employees as we have today. Once the mine water goes through the system, guess what, it's unusable in any form and so can't be returned to the system.

Amazing shortsightedness.....all about money and a once very beautiful town, the Colour City, now becoming "the brown town" very quickly!

As an artist, I have painted many works on climate change, been collected by the Federal Department for Climate Change and one of my paintings (a collaboration with Nyree Reynolds - aboriginal artist) sits at the doors to the Conference Rooms for Climate Change in Canberra. It is a warning......I wonder if anyone ever stops to consider it?

The exhibition I am currently painting is also about the changes to our landscape and the lack of water......not that many people want to think about it! But it constantly keeps in front of me and I fear for the future of this place.

In the north hemisphere, the winters are the coldest for many years...wish they could send some of the snow down here! But still we use up all the fossil fuels we can, we don't lobby governments to change and we idly stand by as they send 45,000 people to a conference designed to fail......imagine the carbon footprint of that exercise alone?

For my bit, I am trying to adjust down and this year is my year of 'clearance' and I am determined to reduce the size of my personal footprint to as low as possible and repurpose what I can. Tonight I sit here and wonder how simple it can get......I live in a small studio, I wash by hand, I dry my clothes on an old fashioned clothes line and I walk a fair bit nowadays. The cooler is currently turned off as I sit here sweating away writing this.....the studio is in darkness and the doors are all open waiting for a breeze to spring up but it will be closer to morning when the breezes come. They say tomorrow will be worse than today and I expect it will reach over 37 degrees here tomorrow (for the temperature challenged, that is over 104 degrees F)

I wonder if people will come to my next solo show and I wonder even more, if they will want to invest in art that is so "hot" and 'dry'? "The Eye of the Eagle" - a bird's eye view of what we are doing to this sacred place.......

Is this the Australia that we should know about? It is written in the geology of the land that this has happened many times before....Australia is a land of cycles of extensive drought and heat followed by floods and cooler weather.....is this just another cycle or is there anything bigger going on here? And can we as humans make a difference? I wonder.......and wonder......how about you?
Posted by joy engelman at 12:05 AM No comments: