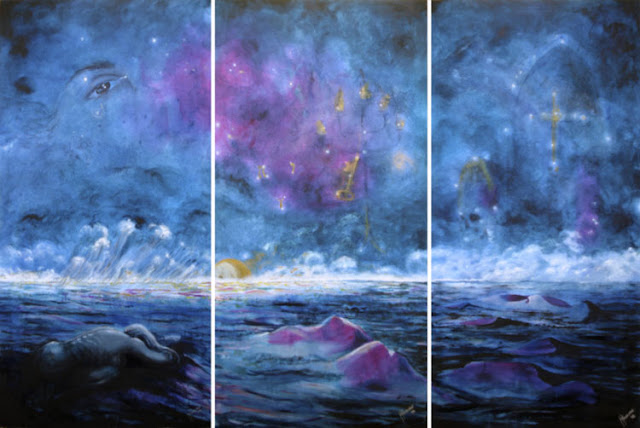 Well, it seems my paintings have made it to Bologna for the "Small Treasures" exhibition in May at the Galleria de' Marchi.

Above is the painting I executed for last show which didn't make it due to the economic downturn and now this time around, we have the volcano in Iceland doing it's thing.....just a reminder of my current theme for painting - Climate Change.

I must say I just love it when Mother Earth behaves badly! Just as we hear that there's a One World Order creating Carbon Credits to bring climate change under control (? what's that about), ol' mum lets off enough pollution to remind us just who is charge.

Of course if you live in those big battery sheds called cities, you hardly ever get out to see how awesome nature really is and so you can imagine in your mind that man is really in charge......for those of us however, that live out in nature, just one summer storm reminds us to be on the lookout.

"The Eye of the Eagle" exhibition at Jayes in Molong went really well and was received with interest by all who came along. Many were surprised at how positive the show was as they were expecting something gloomy but really, I just paint the beauty of the earth as I see it and despite what we do to her. I focused on landscapes from an aerial perspective as seen by the eagle in flight. As I googled my way across the earth daily, I found amazing patterns and places that inspired me to put paint to canvas in the brightest of colours trying to capture the eagle's pentachromatic vision. 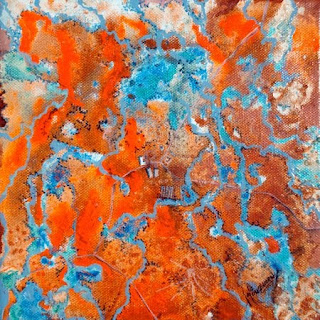 Here's one that I did for "Small Treasures". I was inspired by the recent flooding of our inland. I think this one is called "Flooded Outback" but can't be sure, such is the state of my thinking this year! If you look close, you'll see the little farmhouse caught in the middle of islands between the floodwaters with all the roads closed.

It has been such a busy year and so far, too much to do and think about. The floods have been amazing though and right across our land bringing relief to our drought stricken land which is the 'boom and bust' nature of Australia.

I just love this place. It's so amazing to be alive here and now! and to be able to see it all from Google Earth - what a fantastic invention!

I wish you all the best out there in lala land! Keep sane amongst the madness of it all!
Posted by joy engelman at 3:23 PM No comments: